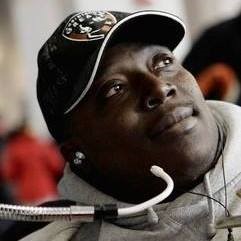 Kenneth Jennings, is a founder and CEO of the Gridiron Alliance Foundation, a non-profit 501 (c) (3) organization in Illinois. He was injured in a high school football game while playing for Simeon in Chicago in 1988. As a result, the injury rendered him as a quadriplegic and paralyzed from the neck down. Despite the impact that a football game had on his life, he lives by the motto “I Am Blessed To Be Able”. Kenneth Jennings is a very active citizen to say the least. He has successfully help worked to get the Rocky Clark Law passed in the state of Illinois. His tenacity will not allow him to stop with the victory in Illinois, he wants mandatory catastrophic injury insurance for all high school athletes across our great country. He won the 2015 Governor’s Volunteer Service Award, he Coach high school football, a Peer Mentor at the Lifecenter at The Shirley Ryan AbilityLab, a Motivational Speaker, he’s is a Co-host of a sports talk show titled Coach’s Corner, and host his own show A Man’s View. Kenneth is soon to be an Author of his book titled Kenneth Jennings How 8 Seconds Change My Life, and also working on his second book The Life Of A Old (Quad) Quadriplegic. Kenneth has been coaching high school football for the past 20 years, he has chosen to Semi-retire to pursue other interests. He still has an undying love for the game of football and is dedicated to the safety of our young athletes. He is a Motivational Speaker who speak to patients, students, business men and women, and people in the medical field. As a Peer Mentor at Lifecenter at The Shirley Ryan AbilityLab, he mentors those who have been catastrophically injured, and other disabilities, as well as support with transition for their families. In the past, he sat on the local school council board at Gwendolyn Brooks High School, The Board of Directors for Increase The Peace Foundation, Daryl Stingley Youth Foundation, and No Dope Express Foundation.